3 years ago
„Winter is coming” – at least to the Northern hemisphere. In the cold season, cyclists face various challenges including darkness, snow and slippery roads. But does that necessarily mean that they are unsafe or ride less? Which measures can be undertaken to support winter cycling? 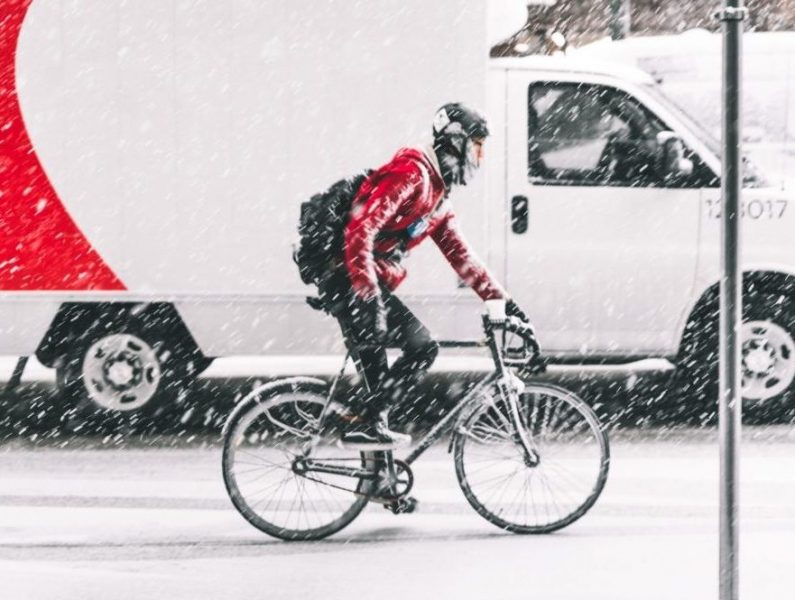 We are identifying main risks related to cycling in winter season and provide comprehensive ideas to planners and cyclists on how to address them. After all, cycling is beneficial for everyone and fun year-round.

Challenges related to winter cycling are manifold. Snow, ice and rain can turn road surfaces into slippery slides. In fact, cycle paths are usually 1-2 °C colder than the rest of the road, leading to earlier and longer critical below-freezing-point-conditions for cyclists (Alblas 2015).

Municipalities often do not clear bike paths at all or not as well and early as roads. Snow piles block bike paths and street shoulders, forcing cyclists to join cars on the lanes under risky conditions. While sharing the road is generally a welcome practice, car drivers may not expect bicyclists under these circumstances and on the road stretches providing bicycle infrastructure.

Another main issue is the reduced visibility of cyclists due to longer night times. Evidence states that the risk for accidents is especially high in dark or dusk of morning (Reurings, 2010). The low visibility is enforced by a simple principle: the more people cycle, the more every individual is noticed. With fewer cyclists on the road in winter, the visibility is further decreased (Jacobsen, 2003; Fyhri & Bjørnskau, 2012).

But what are the actual effects of different winter scenarios onto bike usage? Let us take a look at a few cities and other evidence.

Rostock (located in Northern Germany) has implemented multiple bicycle counters within the last couple of years. Figure 6 shows the counts of four stations, which have constantly monitored cycling numbers during the last five years.

Multiple things become apparent: obviously, bicycle ridership underlies seasonal changes. The very cold winter of 2012/2013 led to significantly smaller numbers of cyclists in comparison to 2013/2014 with a relatively mild winter. The cold and partially rainy months of December 2012 to March 2013 were followed by a wet spring. The “spring break” in April 2013 takes place under similar temperature conditions as the one in March 2014. Both times, average temperature increased from about 0°C to almost 10°C. Also the rainy autumn 2013 led to decreasing numbers of cyclists. These effects accounted for an 13% increase of ridership between 2013 and 2014 for all four stations combined.

The data also reveals that in spite of cold conditions, a substantial share of cyclists keeps on riding the bike. As shown in figure 7, the cycling volumes decreases by about 50 % – indicating that about 50% of all cycle trips are undertaken independently of the seasonal conditions.

In conclusion, this evidence shows that ridership is indeed dependent on season, but also promising since it is far from aborted completely in winter.

Other Cities and Evidence

As for Cologne (Germany), a similar picture assembles (see figure 8). Cologne has been collecting bicycle count data for several years and makes it publicly available as open data. The freezing winter in 2009/10 and 2010/11 are reflected in a significant smaller numbers of cyclists. Opposed to that, the season in 2011/12 was mild. Not only did more people cycle in late autumn, but also the “spring break” in March 2012 was tremendous.

The high linkage between temperature and cycling is also pictured in figure 9. The left diagram shows the derivation in cycle volume over different temperature levels for three cities: Cologne (red), Rostock (blue) and Portland (US) (green). The relationship is linear and also displayed in the very high correlation coefficient R2 of 0.91.

On the other hand, precipitation doesn’t have such a clear linkage to cycle volumes. While a general tendency to less cycling in months with heavy rain can be observed in the right diagram, the correlation coefficient R2 reaches just -0.22.

Bhat and Stinson (2004) presented a comprehensive study in which they studied multiple factors influencing bicycle usage. They segregated the study group according to the dominating climate. In fact, seasonal conditions turned out to be a key factor in this study’s context. The authors showed that the greater the difference in temperature between the seasons, the fewer people cycle in winter. That means that relatively cold regions could still maintain a high share of ridership during the winter, if the relative difference in temperature is low.

Another general finding is that cities with higher general modal share of cycling have less decrease of cycling in winter. This may be due to an increase in the general perception of safety. But also other factors play a role: Figure 10 gives example modal shares for various cities and countries, which is led by Copenhagen and the Netherlands. This indicates that better infrastructure and higher priority for bike lanes in snow cleaning are also crucial measures to support winter cycling. This places a lot of responsibility to the hand of the municipalities.

Measures to tackle key issues with winter cycles are manifold. Municipalities should have potential problems in mind and address them early. But also cyclists can increase their safety with a few simple tricks.

A comprehensive winter cycling strategy starts when building infrastructure in the first place. Avoid the installation of infrastructure that tends to form hindrance in winter such as bollards, too narrow curves and too high kerbs. Make sure your bicycle infrastructure is intact. Repair potholes and faults in the road surface before winter sets in.

A very important aspect is the clearance of cycling lanes. Prioritize the cycle path network in the clearance schedule (examples: Örebrö, Copenhagen, Oulu). Ensure the trafficability of bicycle paths for the street sweeper and invest in special snow clearing machines that are suitable for bike lanes. A suitable street design considers space for snow storage, as the comparison of Toronto and Montreal in the following slide show visualizes.Cycling lanes are best cleared by sweeping or brushing, not by salting. Due to their low weight, cyclists do not crush road salt granules and do not activate salt to dissipate residual snow left by plows. Therefore, cycling lanes require a different treatment for clearance than streets.

Some cities, such as Zoetermeer (NL), have made good experiencing by creating a winter and night network. Paths in this network are the first to be cleared. Furthermore, they feature bright lighting. The definition of such a network, at best in combination with a promotion and information e.g. in form of a route planner, can help to focus limited resources in a clever manner and hence enhancing the cycle experience in winter.

If you want to take it to the next level, follow a project in the Netherlands and heat cycling lanes. So-called „asphalt collectors“ store the summer heat underground and warm cycle lines using the principle of geo-thermal energy. Costs are estimated to be 20 – 40,000 € per kilometer.

You can also use cyclists as maintenance reporters to detect needs of the bicycling community. The municipality of Tampere (Finland) conducted a project in which cyclists were asked to report clearing conditions via social media and received very good response and results (Koistinen 2015).

Promotion through competitions and campaigns, including information on visibility and clothing, bike checking and maintenance, can increase awareness by everyone. Hand out equipment such as winter tires, bicycle lights and reflectors. But after all, make sure to do your own part in regard to infrastructure as well.

First of all: you do not need to buy expensive gear to ride in winter. However, a few adaptions to the harsher conditions are advisable. This includes improved bike maintenance: Lube the bicycle chain and check the breaks regularly. Lower the saddle so that you can reach the ground. Reducing the tyre pressure as well as using an adequate profile helps to increase road grip. For toughest conditions, there are also spiked tyres available, that guarantee grip on slippery and iced roads and cycling lanes.

Especially in the dark time of the year, good visibility is of high importance. Pedal and spoke reflectors are cheap but very effective in increase safety. At best, winter clothes come with reflective elements, that further increase visibility. Finally, use adequate lighting with stand light facility to increase your visibility and field of vision.

Make sure to adapt your behaviour as well. Ride confidently, but safe. Car drivers potentially have increased reaction times, so move around in an explicit manner. Drive in the middle of the road if the bicycle path is not cleared.

Finally and most importantly: Speak up to local authorities. Demand adequate infrastructure and prioritized snow clearing. You have the same rights as every other traffic participant.

The 8th edition of the Winter Cycling Congress will be held from 5th – 7th February 2020 in Joensuu, Finland. Registration and more information here: https://www.wintercyclingcongress2020.fi/

Fyhri, A., Bjørnskau, T. (2013): Safety in Numbers – Uncovering the mechanisms of interplay in urban transport with survey data. Oslo: Institute of Transport Economics.

Lenting, Henk (2015): Inherent changes in safety levels during winter season; on the importance of safety in numbers and other factors. Presentation at the Winter Cycling Congress 2015. Leeuwarden.

(Photo above by: Nikita Ignatev on Unsplash) 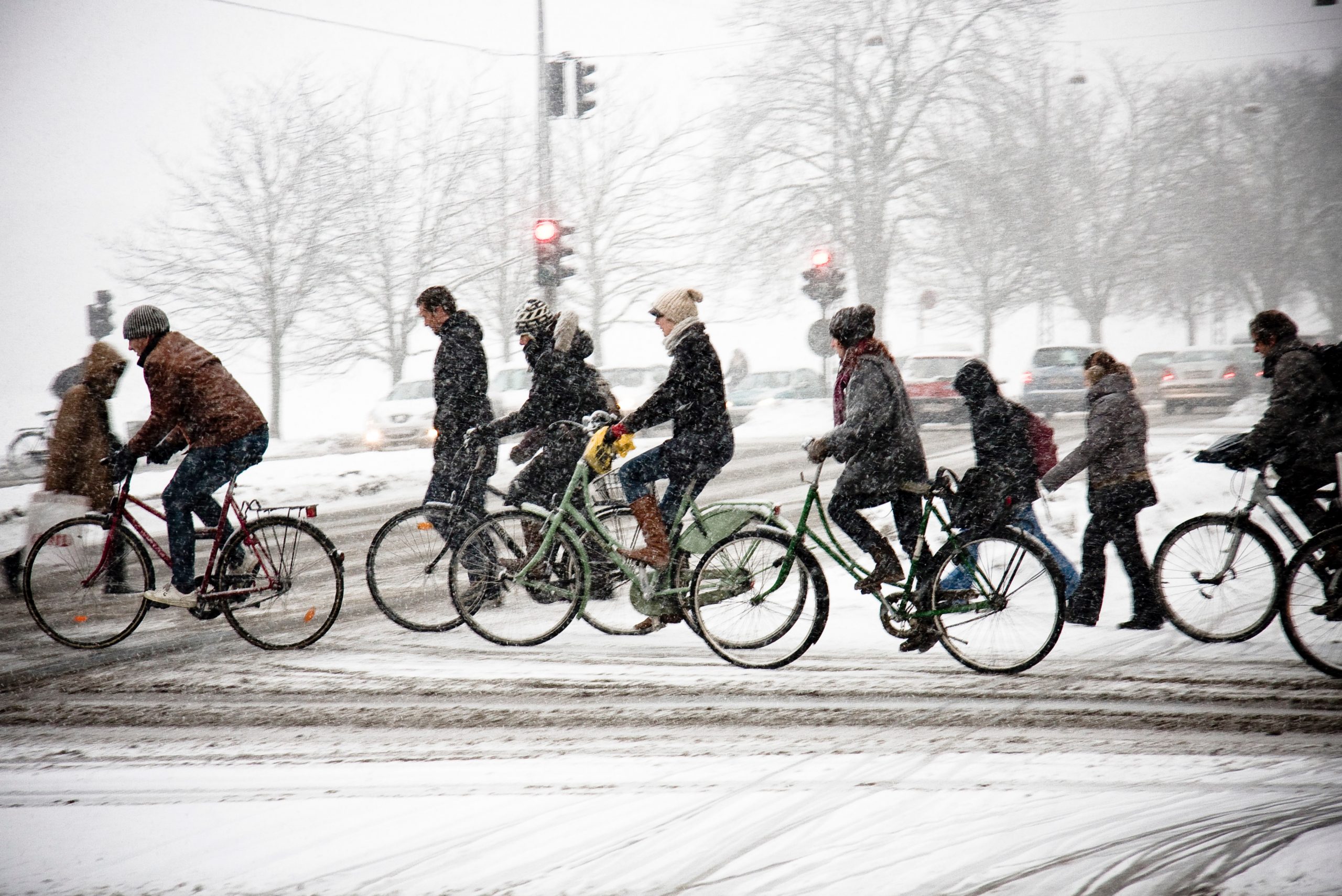 Figure 1: Comparison of Temperature on Cycle Path and Road (Alblas 2015) 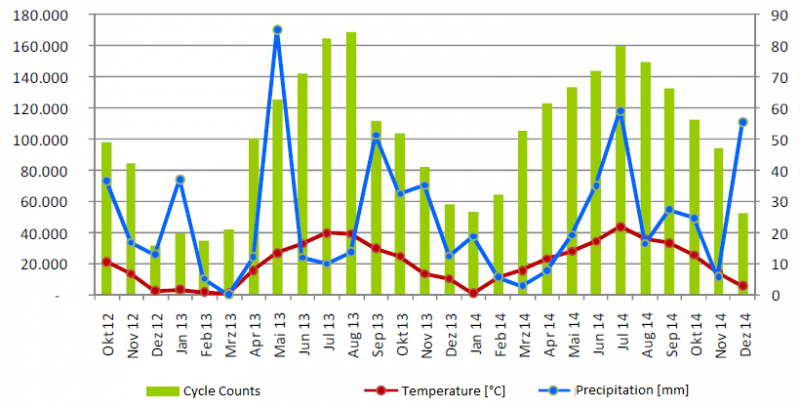 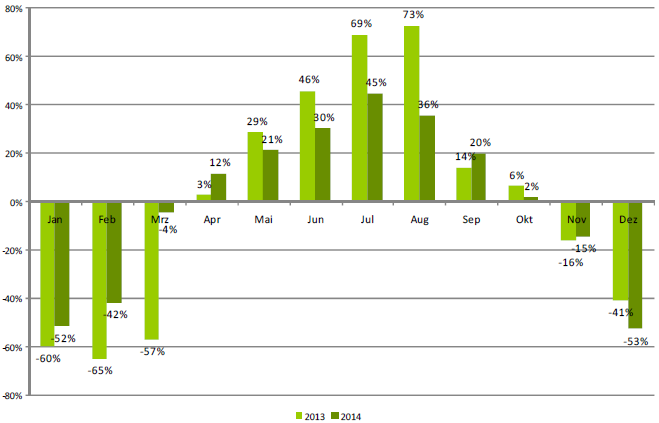 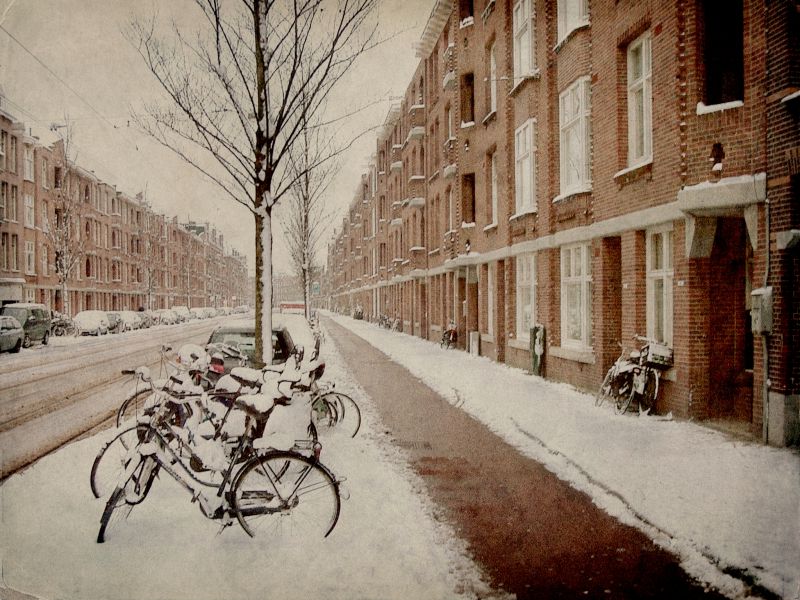 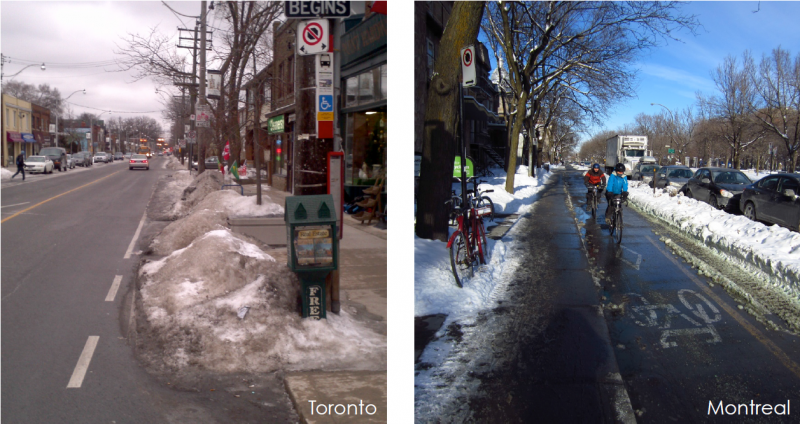 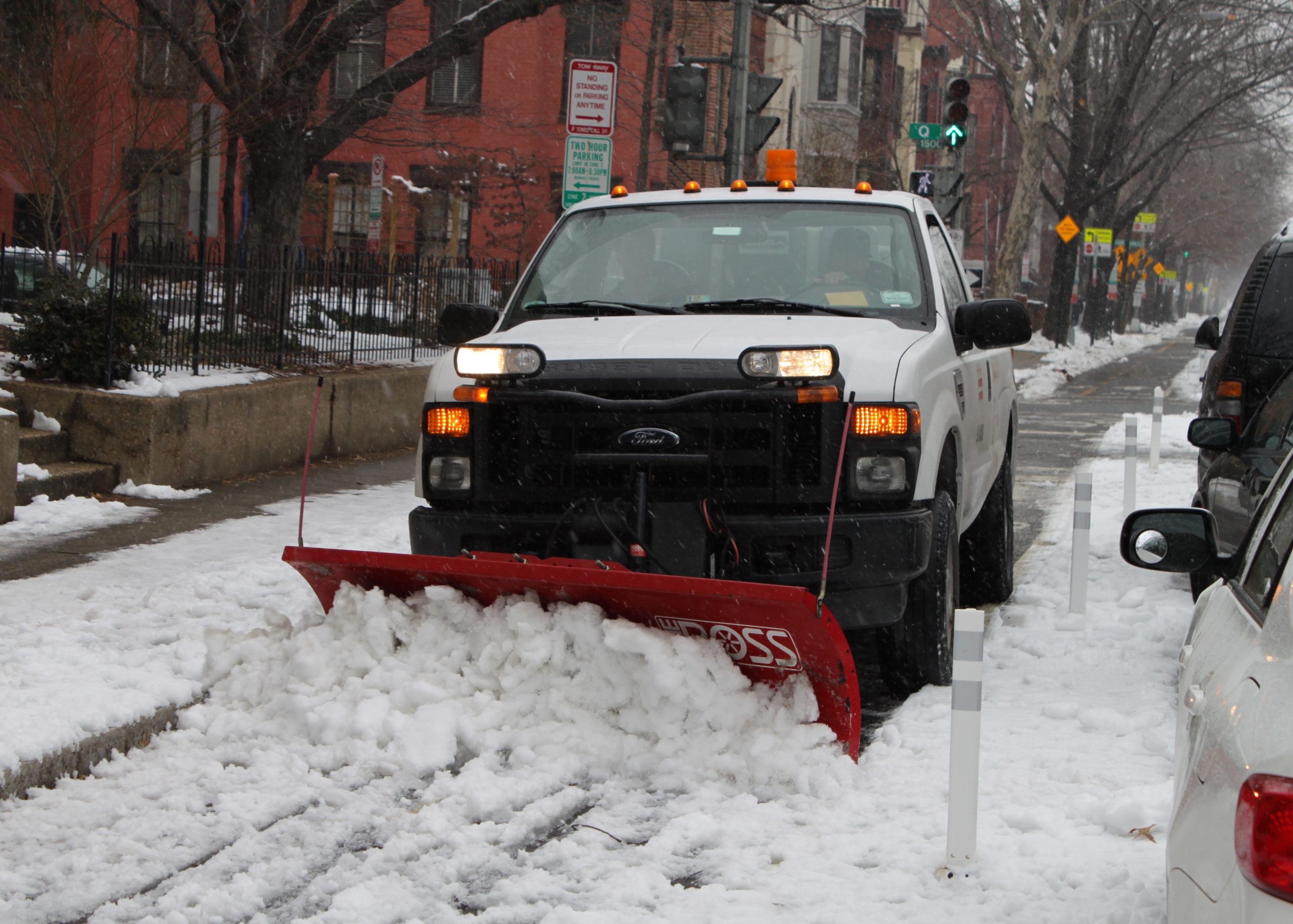