Sustainable Urban Mobility Planning is coming to the Middle Kingdom

2 years ago
To promote smart and integrated urban mobility planning, the European Commission Guidelines on Developing and Implementing A Sustainable Urban Mobility Plan were published in 2014 and the SUMP concept has so far been applied in various countries globally and many best practices have been accumulated. To react to current trends such as vehicle automation, electric- and shared mobility and their implications to public transport systems, the SUMP guidelines have been updated recently. 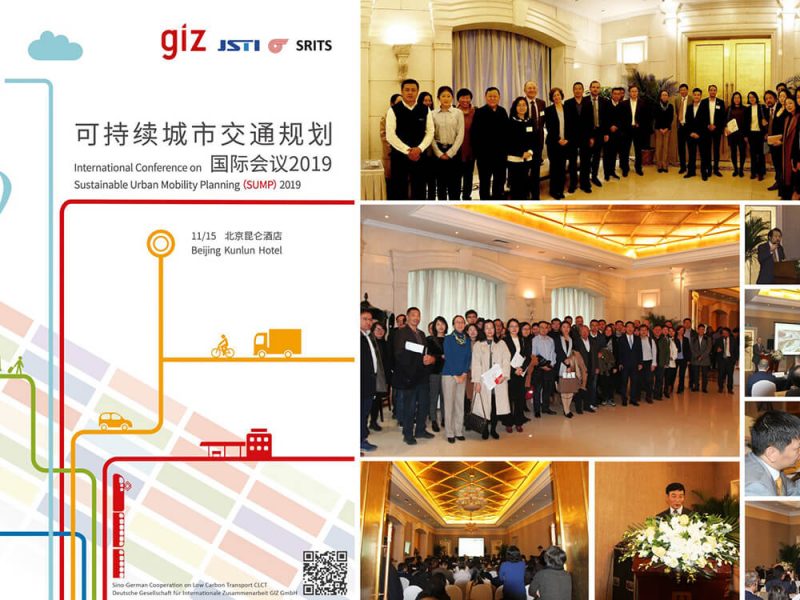 To introduce the newest version of the guideline to China and to debate on the applicability of the concept to the Chinese context, the International Conference on Sustainable Urban Mobility Planning (SUMP) was held on 15th of November 2019 in the city of Beijing. The conference was a joint effort of the Sino-German Cooperation on Low Carbon Transport (CLCT) of GIZ China, the China Communications and Transportation Association (CCTA), the Jiangsu Transportation Research Institute (JSTI) and the Sino Road Institute of Transportation Science Consulting Co.Ltd (SRITS).

About 90 Chinese and international experts and representatives of Chinese city authorities in the field of mobility, urban planning and related sectors got together to jointly elaborate and debate on the advantages of the SUMP concept and the opportunities for applying SUMP in China. In a first session, the updated SUMP guidelines were introduced to the Chinese side by Mr. Siegfried Rupprecht of Rupprecht Consult. Then, experiences with integrated mobility planning of the German state of Hesse, the cities of Bremen, Ningbo and Tianjin as well as the role of Big Data for transport planning were presented by German and Chinese speakers. The presentations were followed by an interactive discussion on planning systems and philosophies and their respective differences and similarities.

In a following closed-door roundtable discussion, the authorities from six cities across China, the experts of GIZ, and the international experts held an intense debate on how to pilot the concept of SUMP. All parties agreed on that even though there are fundamental specifics of the Chinese context, which have to be addressed during implementation, the SUMP concept is seen as a highly valuable methodology for China, which is fully in line with the current policy roadmap of fostering integrated sustainable transport and urban development towards more liveable cities.

The conference ended with the strong commitment of all cities to develop and implement tailor-made SUMPs within the framework of the Sino-German cooperation. Based on this commitment and joint understanding, a solid foundation of piloting the SUMP concept in China has been established. In addition to piloting SUMPs from next year on, a China specific adapted SUMP guideline will be developed, and a training program on integrated and low-carbon transport as well as a planning mechanism to foster the Sino-German and international exchange on best practices and knowledge sharing will be established.

On behalf of the German Federal Ministry for the Environment, Nature Conser vation and Nu­clear Safety (BMU), in partnership with the Minis­try of Transport (MOT) of the People’s Republic of China, the project “Sino-German Cooperation on Low Carbon Transport” (CLCT) is being im­plemented by GIZ.