3 years ago
Tactical urbanism refers to a state and citizen-led approach to neighbourhood building using short-term, low-cost, and scalable interventions to catalyse long-term changes. It has been fast gaining ground across the globe and Coimbatore got a firsthand experience of its transformative power through the ‘Kovai Connect- Celebrating Public Spaces’. With strokes of brush and colourful imaginations, people of Coimbatore are using tactical urbanism to reclaim what is rightfully theirs- street space--and improving safety and comfort for pedestrians and cyclists. 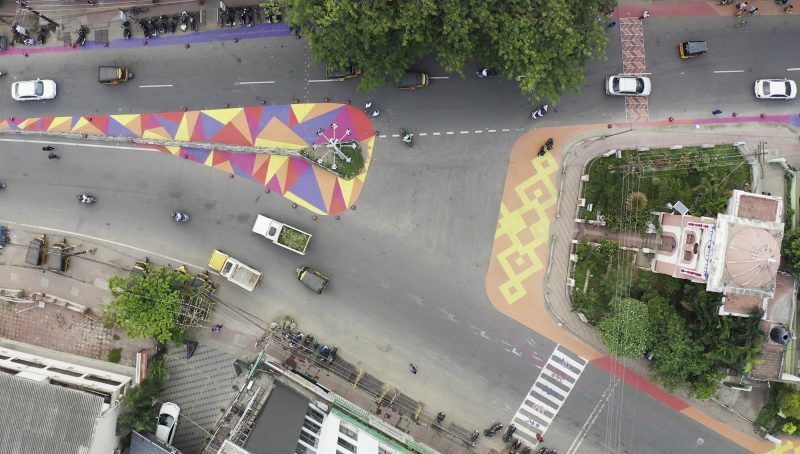 The SMART-SUT is being implemented as part of the technical cooperation forged by the governments of India and Germany for fostering sustainable urban transport system. The implementation focuses on the pilot cities of Bhubaneswar, Coimbatore, and Kochi.  The objective of the project is to make transport in these three cities more sustainable.

CCMC with the support of GIZ under SMART-SUT project has prepared a city-wide NMT network plan under which Big Bazaar Road has been selected as the pilot project for implementation. It is one of the busiest roads in the city, catering to 60,000 bus riders, 27,000 two-wheeler riders, 15,000 car users, 6,000 auto riders, and 30,000 pedestrians on a daily basis.

Chequered patterns resplendent with hues of orange, yellow and violet, greeted road users instead of the dull grey streets. Not just the brightly painted roads, but for commuters there were makeshift seats in form of tyre-piles and wooden structures while beautiful saris acted as canopies to protect pedestrians from the sun.The transformation is brought about using recycled materials like wood, tyres, and clothes etc.

Implemented with public participation approach, the tactical urbanism exercise witnessed people outlining geometrical shapes on the road and then filling them with bright colours along lane dividers and traffic islands. The idea behind the exercise is not merely to transform the physical appearance of the streets but to streamline vehicle movement and create enough space for pedestrians and bus users.

Kovai Connect- Celebrating Public Spaces was open to public from November 25 to December 9, 2019 and feedback surveys were carried out to understand users’ preferences regarding infrastructure improvement.

Level of service for pedestrians and bus users was improved during the implementation period as per the traffic surveys conducted before and during the implementation of tactical measures. Shopkeepers and vendors gave positive feedback to this initiative as they see more space has been provided for pedestrians, organised parking, and improved road safety, which would increase the footfall and business. Based on the feedback from all the stakeholders, CCMC is now finalising the designs for making these measures permanent.

India ranks highest in the world in terms of road accident fatalities and tactical urbanism can be a tool for urban activists, planners, and policy-makers for shaping urban spaces in a new way and improve safety and comfort for pedestrians and cyclists. 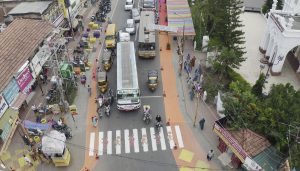 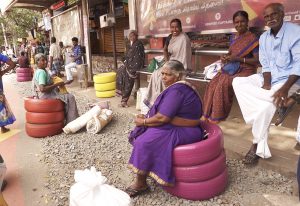 A female commuter sitting on a makeshift seat made of used tyres, Photo by Trinankur Banerjee 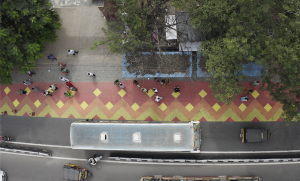